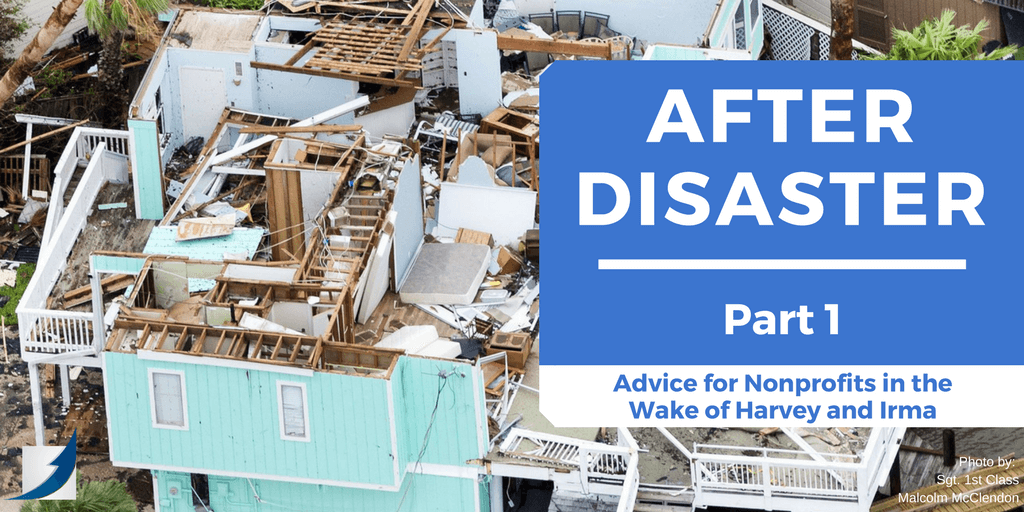 AFTER DISASTER (PART ONE): Advice for Nonprofits in the Wake of Harvey and Irma

It has been an unprecedented one-two punch. Hurricanes Harvey and Irma have been deadly and devastating, leaving millions of people reeling. The losses are staggering, and the recovery will take years.

Americans, generous by nature and never more so than after disasters, are digging deep to respond to the need. That means all charities, whether involved in the relief effort or not, need to be smart and strategic in these crucial weeks ahead, especially heading into the year-end giving season.

David Munshine, President and Chief Executive Officer of The Munshine Group, was just interviewed by CBS News to share insights for both nonprofit organizations and donors following these double disasters.

When it comes to charities not immediately impacted, David told CBS:

Charities not directly affected may have to adjust their messaging and their fundraising in the short term.  It’s most important to be sensitive when soliciting in and around the areas directly impacted by a disaster, but there are many different factors to consider, and so each organization has to find the right answer for them.  One thing I would caution is not to go too far in pulling back fundraising activity and create a self-fulfilling prophecy either.  That would be a mistake.

David noted that social media is often a driving force in increasing the urgency to give in the aftermath of disaster:

I think that for people who are outside an affected area, there’s often a feeling of powerlessness, a feeling of wanting to do something to be helpful, and it’s often an emotional or a visceral response. A persuasive appeal over social media, a compelling video, hearing from a friend or someone in one’s social network is sometimes all it takes to generate that immediate response to do something to feel like you’ve been part of the solution.

And he told CBS there’s specific advice for charities close to the scene:

Have a short and a long-term plan. If you’ve been impacted, even if you’re facing tremendous difficulty, it’s all hands on deck, so staff, volunteers, donors, and your communications vehicles.  It’s time to marshal all of those resources to take necessary advantage of the outpouring of generosity from both core supporters and those who may never have heard of your organization before going online to make a gift.

For all charities, one thing is certain:

While it’s chaotic right now, one thing we know is that needs will persist, often not just for months but for years.  So as that chaos starts to settle down a little bit, it’s absolutely essential for charities to begin to develop a true strategy as soon as possible.

And, unfortunately, there will be a next time — another disaster or crisis down the road.

It’s really incumbent upon all organizations, the small ones as well as the large ones, to do a formal post-mortem and to involve all the key stakeholders, so that’s their staff, their board leadership, their donors and those who benefit from their programs and services, in order to make sure that they have a better plan in place.

In our next blog, we’ll have the best of David’s advice for donors which, of course, is also crucial information for nonprofits to know.

We at The Munshine Group are glad to be able to share our insights and experience and are here to help guide your organization to keep your mission and message on course.